One of the most common mistakes that novice cooks make when pan-frying or sautéing is to put too many things in the frying pan at once. It’s so common, in fact, that there’s even a term for it: “crowding the pan.”

Now if you don’t cook a lot, you might wonder what the big deal is. After all, it seems like if you put more food in the pan, you’ll just be able to cook more at once, right?

What actually happens when you put too much in the pan at once is that it starts to cool the pan. So if, for example, you were trying to brown some chicken breasts in some butter on a nice hot pan, instead the chicken will cook more slowly. The meat will start to release some of its water, and instead of searing nicely, it might actually start to boil instead. In the worst case scenario, you’ll end up with chicken that is both dry and mushy at the same time, and a pan full of tan gelatinous goo.

Something similar can happen in pricing. If you are already doing a ton of tactical activities and you try to add in some strategic work on top of everything else, the effect is to “crowd the pan.”

You won’t have enough time or energy to put toward either the tactical or the strategic activities. So instead of crisp, “fully cooked” ideas, you’ll end up with strategic plans that are sort of mushy, while at the same time your tactical work is only half-done.

The solution is to make some room before you start adding on the strategic work. That often means deciding not to do some of the things that you are currently doing.

You might also be able to free up some space by restructuring some of your work. For example, maybe you can run reports less often, bi-weekly instead of weekly, for example. Or if you run a lot of similar reports, maybe you can run them all on the same day to save some time. Similarly, if you generate or evaluate quotes for deals of a particular size, can you change those thresholds slightly to give your team back some time without really affecting the overall business?

Of course, changes like these can have a big effect on organizational dynamics. If you don’t approach them carefully, you can end up with staff members who worry that you don’t think their jobs are important or co-workers in other departments who think pricing isn’t working as hard as you used to.

We go through some of these important considerations in more detail in the webinar From Tactical to Strategic Pricing. In addition to offering more tips about how to make space for strategic work, it lays out a complete process for becoming a team that does more of the most valuable work for your business.

Another good resource is the Developing a Winning Roadmap for Pricing Success. It explains how to create a plan for becoming a more strategic group without losing sight of your important day-to-day activities.

Like cooking, pricing is largely a matter of getting the right ingredients and following the recipe. If you can avoid “crowding the pan,” with too much non-strategic work, you’ll be well on your way to not just nourishing your organization, but helping it become a five-star establishment. 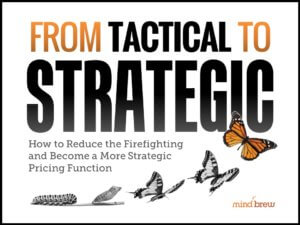