“That Salesperson Is So Frustrating”

In Yosemite National Park, the rangers have a saying: “A fed bear is a dead bear.”

You see, once bears get a taste for human food — whether it’s from a garbage can or an unattended picnic cooler — they keep coming back for more. That puts humans in danger, which means the bear in question must be relocated or euthanized.

It just seems silly, doesn’t it. Bears gotta eat as much as they can to get ready for their long winter naps. Bears aren’t going to stop eating anything tasty that’s easy to get to. Bears are gonna bear.

Instead, the Rangers install bear-proof trash bins and work on educating the humans on how to live in harmony with the bears.

Something similar happens in the relationship between pricing and the sales team. We spend so much time and energy trying to get sales to do the right thing when it comes to pricing. It’s frustrating because the things we are asking them to do are ultimately going to benefit them and the company — but so often they just won’t change. Whether it’s getting them to close deals at target prices or just bothering to look at a report, getting sales to do anything new is like — well, like training a bear not to eat leftover peanut butter sandwiches.

But maybe, just maybe, instead of trying so hard to change their nature, we should change our own behavior instead.

You see, sales is gonna sales. They are always going to be laser-focused on getting deals signed. It’s going to be really hard to get them to focus on anything else — unless of course, it aligns with their own personal goals.

That’s the trick: aligning what pricing is asking with sales’ existing processes and desires.

Sometimes this is as simple as emailing them a report instead of asking them to log in to a separate system to view it. Or maybe it’s adding a pop-up to the quoting tool that reminds them how different price points will affect their personal compensation. The possibilities are endless — but it requires some thought and creativity to find the solutions that will work for your organization.

Because the relationship with sales is such a common and persistent problem for pricing, PricingBrew has a wealth of resources dedicated to the topic. Here are four of the best:

Plus this Thursday’s subscriber webinar, Neutralizing the Sales Team’s Excuses will dive into how to address the multitude of “reasons” sales provides for poor price execution. We’ll be sharing how to tell the difference between a legitimate reason, a symptom of a deeper root-cause, and just a CYA excuse. And we’ll discuss the most effective and diplomatic ways to push back and move sales in the right direction.

Sadly, there’s no such thing as a completely bear-proof container. As one Yosemite Ranger noted, “There is a considerable overlap between the intelligence of the smartest bears and the dumbest tourists.”

Similarly, you may never achieve perfect harmony between the needs of the pricing team and the behavior of the sales team. But we have the utmost confidence in the intelligence of pricing teams to design better systems that allow them to work with sales instead of trying to counteract their nature. In this on-demand webinar, you'll learn about the pros and cons of various approaches for infusing pricing performance into your sales compensation plan to reduce unnecessary discounting and boost profitability. Sales often views Pricing with skepticism and doubt. And as a result, they disregard our suggestions and ignore our recommendations. What can we do to get them to see us as a trusted partner? While equipping sales reps with accurate pricing guidance is a priority for many, it's hard to get right. In this session, learn seven key ingredients to deliver guidance your salespeople will actually use. 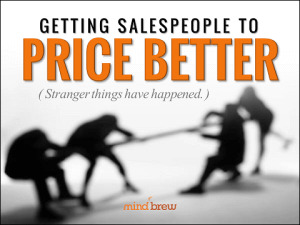